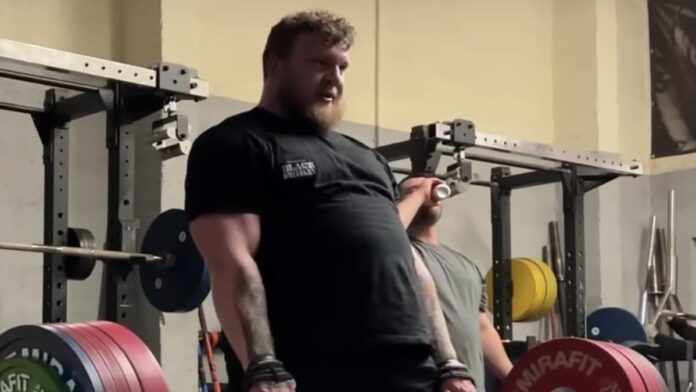 Stoltman wants a shot at the all-time deadlift World Record.

With two straight World’s Strongest Man (WSM) titles to his name, Tom Stoltman might be the biggest name in strongman. After winning his second consecutive championship in Sacramento, CA, the Scottish athlete didn’t appear in a strongman contest in the final quarter of 2022.

A June 2022 soccer charity appearance where Stoltman helped raise $18.8 million was one of his final major public appearances. While he didn’t compete, Stoltman still trained hard to build his strength. On Dec. 4, 2022, in a video on his YouTube channel, Stoltman revealed he intends to break the all-time deadlift World Record.

The current heaviest-ever deadlift of 501 kilograms (1,104.5 pounds) belongs to 2018 WSM winner Hafthor Björnsson. Stoltman calls his deadlift preparation the “Road to 505” series in reference to his eventual 505-kilogram (1,113.3-pound) World Record attempt. Check out the video below:

This first “Road to 505” video featured Stoltman working toward an eventual beltless 300-kilogram (661.4-pound) deadlift for four reps. After warming up, Stoltman began with five sets of 250-kilogram (551.2-pound) deadlift triples with lifting straps and no belt. Stoltman’s older brother Luke — the 2021 Europe’s Strongest Man (ESM) — and their novice strongman younger brother, Harry, got some sets of their own in while Tom rested.

The middle Stoltman brother was fighting through a cold during the session, and his fatigue was evident after his respective sets. Tom didn’t let his affliction slow him down, as he successfully completed all 15 beltless reps of the 250-kilogram (551.2-pound) deadlift over his five sets.

Tom Stoltman will make his World Record deadlift attempt sometime in 2024, though he did not provide specifics as to when or where that attempt will occur.

By the time Stoltman attempts 505 kilograms (1,113.3 pounds), that figure might not be the deadlift record anymore.

After deadlifting his all-time competition best of 483 kilograms (1,064.3 pounds) at the 2022 Eisenhart Black Competition (EBC), fellow strongman Ivan Makarov revealed he would attempt the World Record. Makarov’s personal timeline is for his own 505-kilogram record attempt at the 2023 World Deadlift Championships (WDC), currently scheduled for some time in early September 2023. That means Makarov — the 2021 WDC champion — could potentially set a new deadlift high mark roughly four months, at minimum, before Stoltman attempts it for himself.

Stoltman and Makarov might find themselves in a tense race to alter the record books.

Should You Train the Deadlift on Back Day or Leg Day? What to Know for Results and Recovery

pickstofit - May 8, 2022 0
Mexican Salad, can be a sumptuous meal in itself or a delectable accompaniment to your dinner. Food blogger Tarika Singh ... source

pickstofit - September 6, 2022 0
Celebrity chef, Pete Evans, takes us on a flavour-filled journey back to the way our ancestors ate with insights from nutritional ... source

Should I Do Cardio for Weight Loss? – Dr.Berg Talks About Exercise, Cardio and...